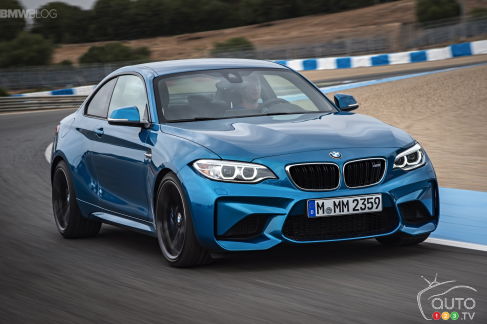 BMW presented the global premiere of its all-new BMW M2 and BMW X4 M40i models yesterday at the 2016 North American International Auto Show in Detroit. The M2 is the new entry-level model in the carmaker’s M performance line of vehicles, while the turbo-powered X4 M40i will offer premium power and performance twinned with premium luxury.

Slated for arrival at dealerships this coming April, the BMW M2 will be equipped with newly developed M TwinPower turbo technology, producing 365 HP and 343 lb-ft of torque out of its 6-cylinder, 3L engine. An overboost function will bump power production up to 369 lb-ft of torque, allowing for an impressive 0-to-100 km/h time of just 4.2 seconds.

First to dealerships, however, will be the new X4 M40i, the M version of BMW’s coupe-like sedan, which is expected to be available for delivery as of February 2016. Propelled by a 355 HP engine and offering M Performance TwinPower turbo technology like the M2, the new M40i will deliver BMW-promised best-in-class acceleration of 0 to 60 mph in 4.7 seconds, with an electronically limited top speed of 150 mph. BMW ConnectedDrive and intelligent xDrive technologies will be included as part of its package of advanced tech features.